Schools in the Sunshine State may not rank at the top as far as SAT scores or high school graduation rates, but they did suspend

students at the highest rate in the country during the 2011-2012 school year, according to a report released Monday by UCLA’s Center for Civil Rights Remedies.

Using the latest data from the U.S. Department of Education’s Office for Civil Rights, the report and an accompanying research tool analyzes which states and school districts handed out the most out-of-school suspensions and whom these suspensions most affected.

Overall, while suspension rates for black, white and Latino students were similar in 2011-2012 to suspension rates in the early and mid-2000s, they were still significantly higher than they were in the early 1970s, when the federal government began collecting such data. Black students, Latino students and students with disabilities are still significantly more likely to face this type of punishment.

“The question we’re asking here is, ‘Are we closing the school discipline gap?'” Daniel J. Losen, the director of the Center for Civil Rights Remedies, said in a press release. “For the first time, we can answer that question in a really meaningful way. And the answer is, ‘A lot of school districts are closing the gap in a profound way, but not enough to swing the national numbers.'”

Florida posted the highest suspension rate in the country for elementary and secondary school students. At the elementary school level, Florida suspended 5.1 percent of young students overall, as shown in the map below. The average national suspension rate for elementary school students, on the other hand, was only 2.6 percent, according to the report. Notably, state-level data were not presented for New York and Hawaii because of errors in how data was reported by school districts in the states. 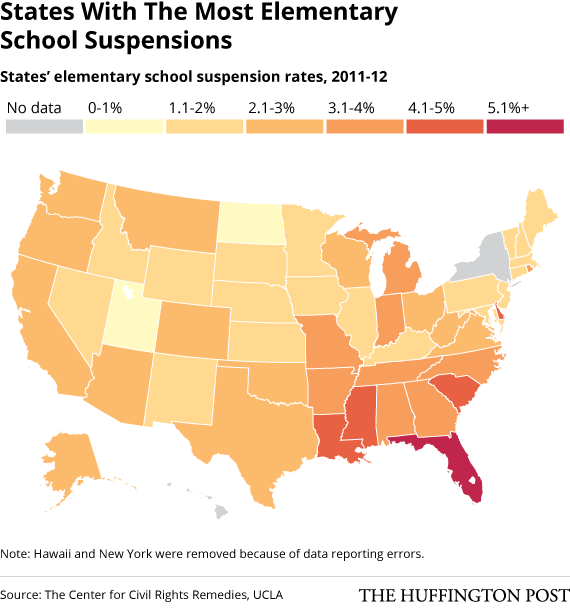 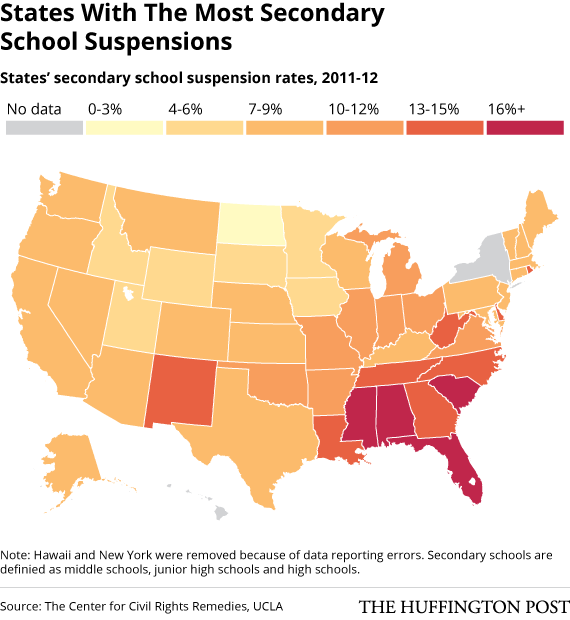 School suspensions put students at greater risk for dropping out and contribute to the so-called school-to-prison pipeline, which pushes students away from school and into the criminal justice system, research shows.

“Decisions regarding discipline policies as well as student suspensions are made at the district level,” the Florida Department of Education said in response to a request for comment about the high suspension rates. 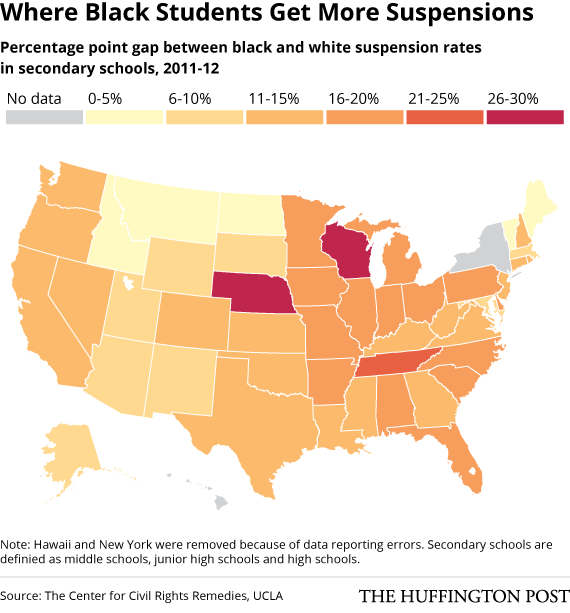 Two of the 10 school districts with the highest secondary school suspension rates in the country were located in the greater Ferguson, Missouri area, including the school district attended by black teen Michael Brown. At age 18, Brown was fatally shot by white Ferguson Police Officer Darren Wilson in August. His death set off weeks of unrest in the area.

“The Normandy school district in Missouri, where Michael Brown attended, is among the highest suspending districts in the entire nation with an overall suspension rate for black students of just under 50 percent,” Losen said in a press release. “This type of large disparity impacts both the academic achievement and life outcomes of millions of historically disadvantaged children, inflicting upon them a legacy of despair rather than opportunity.”

Suspension rates across the country vary dramatically by district and by subgroups of students. While some school districts suspend students at egregious rates, most districts only suspend students in moderation. Kids around the country lost almost 18 million days of school instruction due to out-of-school suspensions, the report estimates. It calls on schools to stop over-relying on this form of discipline.

“It’s healthier and safer when schools are suspending fewer kids — they’re engaging students and have rates of trust between students and teachers and parents,” Losen told The Huffington Post.

Since 2011-2012, Losen estimates that schools have taken strides to reduce suspension rates, and that future reports will show a decrease in use of this punishment. The federal government has taken an active role in promoting alternatives to exclusionary discipline, and in January 2014, the U.S. Department of Education and Department of Justice released joint guidance emphasizing schools’ responsibility to administer punishments in a fair, non-discriminatory way.

“People think suspending kids out of school is free, but in fact, there are tremendous costs because it increases one’s risk of dropping out-of-school and juvenile justice involvement,” said Losen. “The excessive use of suspension has a tremendous cost to the taxpayers and we need to understand that schools can do much better on this.”