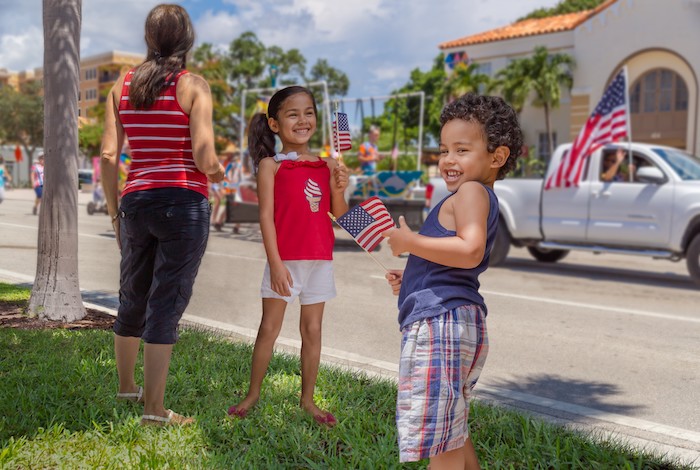 The educational attainment of recently arrived Latino immigrants in the United States has reached its highest level in at least three decades,

reflecting changes in where immigrants are coming from and rising education levels in Latin America and other regions, according to a Pew Research Center analysis of U.S. Census Bureau data. 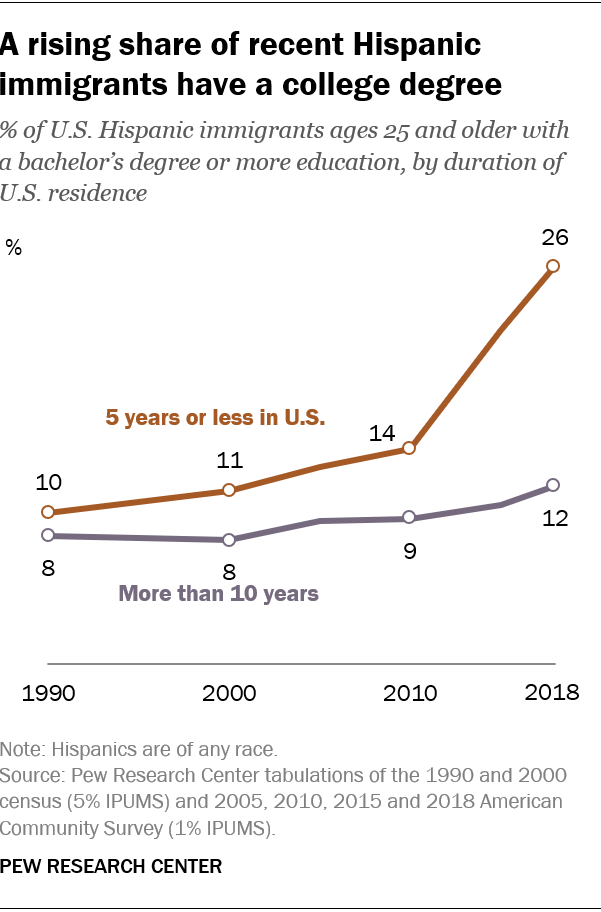 About a quarter (26%) of recently arrived Latino immigrants ages 25 and older had a bachelor’s degree or more education in 2018, up from just 10% in 1990. They are among a rapidly growing share of recently arrived Hispanic immigrants who have completed high school – 67% in 2018, up from 38% in 1990. These increases have helped raise the education levels of all Latino immigrants and shifted the group toward high-skill occupations and away from low-skill ones. Latino immigrants who have been in the U.S. for more than a decade have a very different educational profile than recent arrivals – defined here as those in the country for five years or less. About one-in-ten Latino immigrants who are long-term residents (12%) had a college degree in 2018, part of the 54% of long-term Latino residents who had completed high school.

The rising education levels of recent Latino arrivals has helped narrow the gap between this group and the overall U.S. population. In 2018, 33% of U.S. adults ages 25 and older had at least a bachelor’s degree, 7 percentage points higher than recently arrived Latino immigrants. In 1990, by comparison, there was an 11-point gap.

The share of recently arrived Latino immigrants with a college degree varies widely by country of origin. In 2018, more than half of recent Latino immigrants from Spain (80%), Venezuela (65%) and Argentina (64%) had at least a college degree, as did 41% of those from Colombia and 34% from Peru. These five origin groups together made up roughly half of Latino international students in the U.S. that year – students who were mostly from Mexico, countries in Central and South America, and Spain. 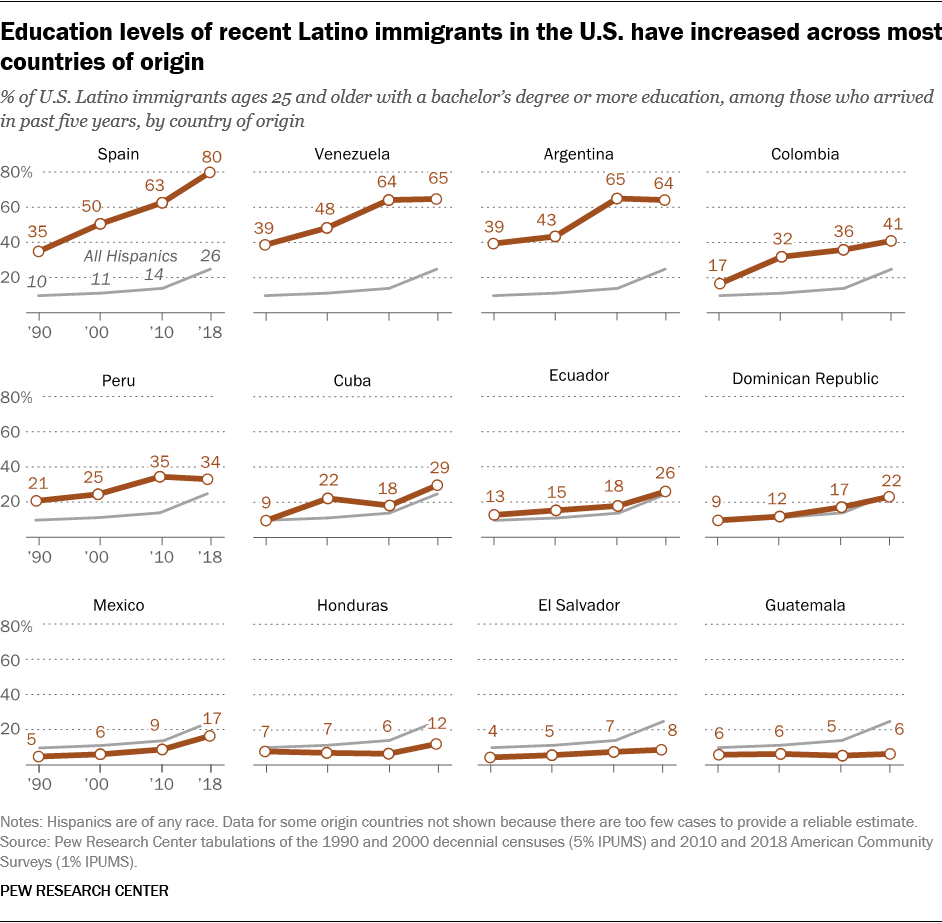 Education levels have risen for recent Latino arrivals from a number of origin countries. Cuba and Mexico saw some of the largest increases from 2010 to 2018, with the share of college-educated recent arrivals from these countries increasing from 18% to 29% and from 9% to 17%, respectively.

Mexico and Cuba also had the highest number of recent arrivals in 2018 (though the numbers from Mexico have decreased in recent years).

The substantial rise in educational attainment among recent Latino arrivals has occurred during a time of changing migration patterns from Latin America and Spain. From 2010 to 2018, the number of recent arrivals from Mexico – the largest source of migrants to the U.S. since the 1980s – has decreased as the number from other countries has increased. As a result, those from Mexico accounted for 37% of recently arrived Latino immigrants ages 25 and older in 2018, down from 54% in 2010. Meanwhile, the next three largest origin groups all had larger shares in 2018 than in 2010: Cubans (from 8% of all recent Latino arrivals in 2010 to 13% in 2018), Dominicans (from 5% to 8%), and Venezuelans (from 2% to 8%) experienced significant increases.

Educational attainment of recently arrived Hispanic immigrants differs by state. In 2018, those in Michigan (43%), Florida (34%), Washington (31%) and Maryland (29%) were among the most likely to have a bachelor’s degree or more. Meanwhile, Texas and California, both among the states with the most Hispanic recent arrivals, have lower shares or recent arrivals with at least a bachelor’s degree (24% and 19%, respectively).